Moving on, but still here

Two years since I last posted. I've told myself that blogs are dead, that no one reads them. We'll see.

Two years later, I have completed the Black Hat thriller series, with the publication of Vanished in February. It's time again to move on and try new things.

I'm working on a standalone. Or maybe it's a trilogy. It could be either. But it's not a conventional series. It's something I've wanted to write for a long time, something I actually started back before I began writing the tattoo shop mysteries. It will be very different than my other three series, as it's written with several points of view in third person, rather than my usual first person POV. It's been a challenge.

It's also been a challenge because I'm distracted by daily life as well as what's going on in our country right now. I have just deactivated my Facebook account. Probably only temporarily, while I work on the revisions to my book. I've found that Facebook too easily distracts me. I am tempted by all the shiny objects, all the news that bombards us every day, all day. I need a break from it, as it's exhausting.

Hopefully I will have something to show for my break from social media within a few months, something that I hope knocks the socks off some editor somewhere. At least that's what I'm aiming for. Wish me luck, and perhaps I'll be back before 2020. But I can't promise anything...
Posted by Karen Olson at 6:32 AM No comments:

It's been a long time since I've posted. The last time, I was excited about the publication of my book HIDDEN. Since then, SHADOWED, its sequel has debuted and I've turned in the manuscript for BETRAYED, the third in this suspense series featuring a woman computer hacker. BETRAYED will be out in the UK on December 30, and here in the US on April 1. I'm not sure how I feel about having a book debut on April Fool's Day...

Since I last posted, too, I've had a upheaval in my personal life. I switched jobs, from a part time one editing a medical journal to a full time one in the acquisitions department at Yale Press. The two positions couldn't be more different, and my entire life schedule had to change. I began getting up at 5:45 a.m. to get to the gym by 6 and writing during my lunch hours and for a couple of hours after work. My daughter is in college now, though, so at least I no longer play the role of chauffeur. It's been a bit of an adjustment, but I think I'm finally on track.

It's been interesting being on "the other side" of publishing these past months. I now see all the behind-the-scenes things that I never realized before. I can read my own contracts and understand them, although royalties "on reserve" still baffle me. I enjoy working with the authors, and I think they feel a little better knowing that I can understand their frustrations and joys about publishing a book. I had one author call me when his book came out just to tell me how wonderful it was to hold it. He said, "you know how that feels."

I'm hoping to have many more experiences like that myself. In between, though, I'll try to get here a little more often. Hope to see you here, too.
Posted by Karen Olson at 12:47 PM No comments:

More books in the HIDDEN series!

I am so thrilled to announce that there will be a third book in the HIDDEN series! I have recently signed a contract to continue the series with Severn House Publishers. The title will be BETRAYED.

The second in the series, SHADOWED, will debut in the UK on February 28 and in the US on June 1. Here is a teaser:

The computer hacker formerly known as Nicole Jones is now living as Susan McQueen on a remote island in Quebec, Canada. She is living a quiet life, working as an artist - but she has not given up her computer. While in an online chat room, she sees a shadow - someone is inside her laptop, watching her every move, and somehow knows exactly who she is. Afraid that he will track her down, Susan is on the run again - but from whom? Is it the FBI or someone associated with her past crime sixteen years before? Making her way across the border and back to the USA, some unsettling discoveries make Susan realize that she won't be able to escape her past a second time.

Are you hooked yet?

And here is the cover of SHADOWED: 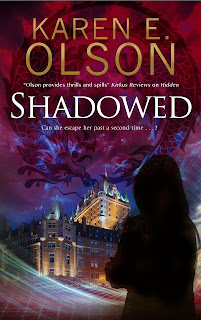 What do you think?

Posted by Karen Olson at 2:47 PM No comments:

I decided that I needed to change it up a little, since my new books are more suspense than mystery and definitely not cozy. It had been a long time since I really updated my website, so it was definitely time. I have separate pages for my Annie Seymour and Tattoo Shop mysteries, and a new page for HIDDEN, with an excerpt from the book and the acknowledgments that were inadvertently left out of the actual book itself.

I'm really thrilled with how it looks. Check it out!

And please send me your comments through the Contact page. I set up a new contact form and I'm hoping it keeps the spam at bay.

In other news, I finally finished the sequel to HIDDEN and have sent it off to my editor! The title of the new book is:

In this book, Nicole Jones, who is now Susan McQueen and living in Canada, discovers that she has a "shadow" in her computer who is watching her every move.

SHADOWED will come out in the UK on February 28 and the US on June 1.

I should be writing

I should be writing.

And I am. In the way that this book is being written.

To explain: I have never written a book like this before. I am a fairly linear writer. The story comes out of my head in the order that it will appear. Usually. This book is quite defiant, though, in that it doesn't want to be linear in my head at all. It wants me to write a scene but it doesn't necessarily want to be in the place that I have written it. I am constantly cutting and pasting, moving bits of text around to find where it fits best.

I have finally hit 40,000 words, though, which means I am about halfway done. I have two months to go. But the book isn't the only thing on the agenda this summer. I have a daughter who has just graduated high school, we have just hosted a graduation party, we have to start organizing what she's going to need to bring to school. We are heading to New York City for the Boomer Esaison Foundation's Run to Breathe in a couple of weeks; we have a trip planned to Montreal in August.

That's the way this book is going. I have no idea what's going to happen from one day to the next.

So I should be writing.
Posted by Karen Olson at 12:10 PM No comments:

Nods and breaths and other victims of copy editing

I've just gotten the page proofs for HIDDEN. This is the last stage of the editing process, when the book has been typeset and I get to look at it one last time for any errors. I really like seeing how the pages are going to look inside the book, because I notice that sort of thing when I'm reading a book. Because the pages have been typset, though, I can't make any huge changes at this point; it's merely to look for spelling or small grammatical issues. It was in the copy editing stage that those bigger fixes can be made. And I made them.

I was appalled at how many times characters in the book were nodding. They nodded here and there, sometimes two or three times to a page. That's not all, either. Everyone seemed to take deep breaths. All. The. Time. There was so much heavy breathing going on, it could've been an erotic romance. Or a long description of an asthma attack. How I didn't see this before I sent it off to my editor is a mystery. And I'm embarrassed that I didn't see it. But not looking at the book for four months helped me look at it with much more open eyes. So there is a lot less heavy breathing and nodding going on now.

I have a superb copy editor at Severn House. Sara caught a lot of those little nitpicky grammatical problems that are the bane of the copy editor's existence. I admit to loving being a copy editor, so the copy edit stage is one of my favorites. One thing about being published by a British publisher is that sometimes my Americanisms were questioned. As an example, there was a sticky note asking what it meant when one character said he had to "hit the head."

There were times while I was looking at the copy edits that I wondered if I didn't like this more than the actual writing. But that came from the fact that the second book in the series is very slow going at the moment, and copy editing was so much easier because HIDDEN is already written. (There are a ton of reasons why writing is slow right now, most of them external, like the fact that my daughter is going to be graduating high school in less than a month and there is so much to do that isn't writing.)

I have a week to go over the page proofs and then the book will be out of my hands completely. I won't be able to change a word, and what's there will be there when you open the book to read it. That scares the daylights out of me, she says while nodding and taking a deep breath...
Posted by Karen Olson at 8:29 AM No comments:

I have a cover for HIDDEN! My new publisher, Severn House, has created the perfect cover for the book. It evokes the atmosphere I've created perfectly. Check it out! 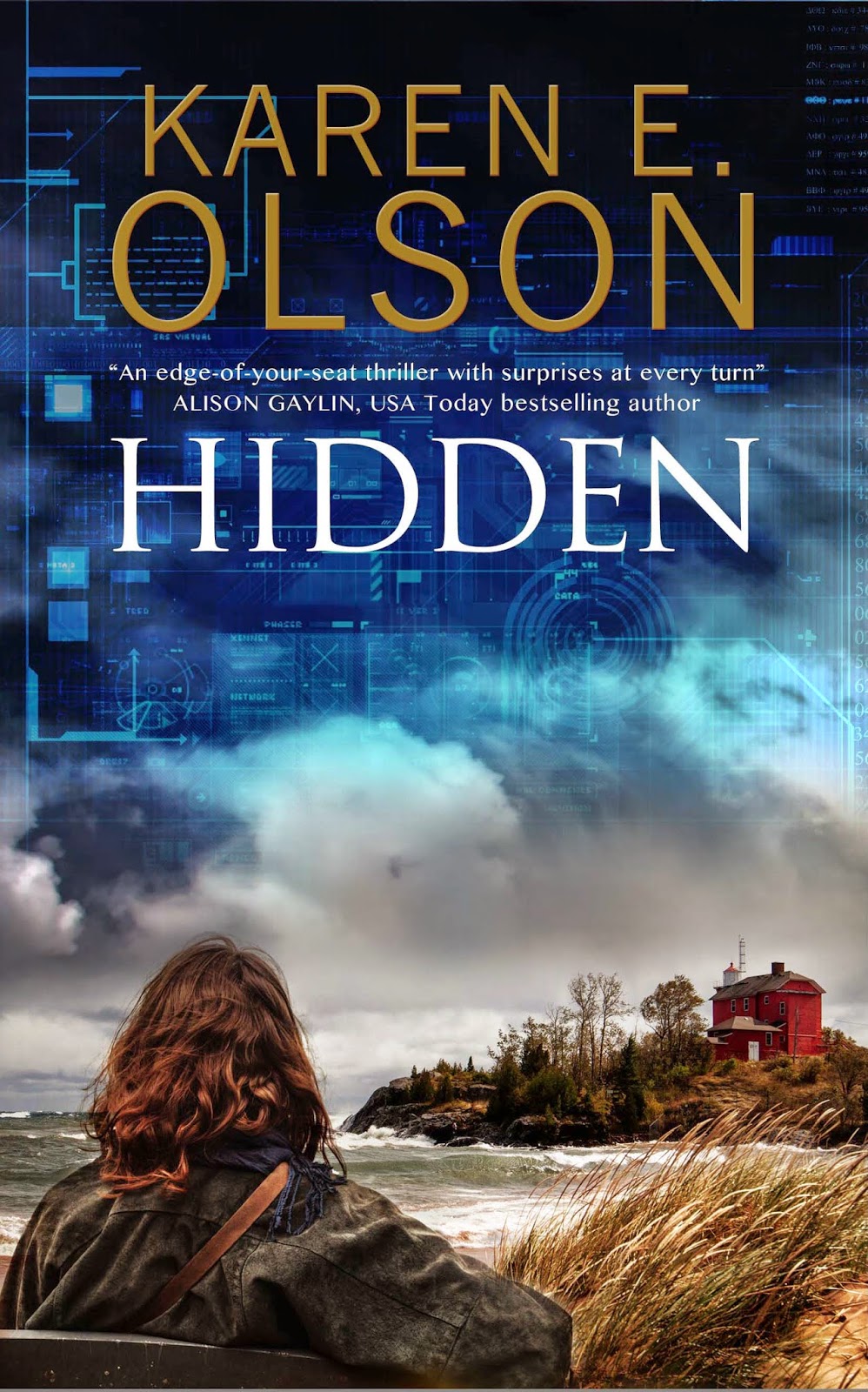 Severn House has also sent me the cover copy:


Nicole Jones – if that is her real name – lives off the grid. She doesn’t have a license, passport or bank account. She definitely doesn’t own a computer. She hasn’t left her refuge, Block Island, in fifteen years. She’s hidden from the world and she likes it that way. Nicole doesn’t use a computer, not because she’s afraid of it, but because she’s afraid of what she – a badass hacker in her past life – would do with it.

When the last person Nicole wants to see suddenly reappears, using a name he knows will draw her out, Nicole realizes that her time hidden is now ending. Her past secrets tumbling into the open and her carefully constructed new life set to fall apart, Nicole must re-hone her long-suppressed computer skills in order to escape from an island that is no longer a haven, but suddenly a prison.

I can't wait to see it in print!

Karen Olson
Twenty years of working in newsrooms with mice, moldy carpeting, out-of-date computer systems, cranky editors, weird reporters and an even odder public lent itself nicely to writing a mystery series about a police reporter. After being out of the newsroom for a while, I decided to disregard all that "write what you know" stuff. I wrote four books in a series about a tattoo artist who solves crimes in Las Vegas. My new series, starting with HIDDEN, is about a woman computer hacker on the run and is available now. 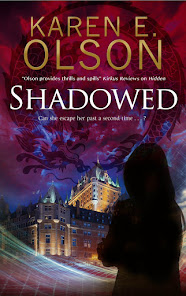 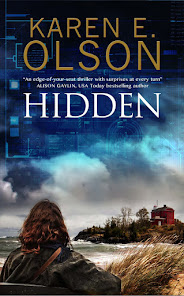